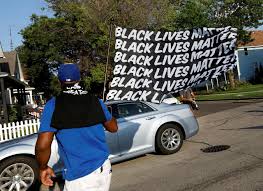 A man holds a flag with the words Black Lives Matter during a protest following the police shooting of Jacob Blake, a Black man, in Kenosha, Wisconsin, U.S., August 27, 2020. REUTERS/Brendan McDermid/File Photo

(Reuters) – The robust American traditions of free speech and gun rights are clashing.  This is happening at anti-racism protests this year in a way rarely seen before in the United States, legal scholars and law enforcement leaders say.

The First Amendment of the United States Constitution guarantees citizens the right to free speech.  The Second the right to bear arms. But they are colliding in new ways, as open carry of guns to demonstrations becomes more common. Officials are worried,  officials at six police departments along with six legal scholars said.

Some worry that U.S. democracy will suffer if guns intimidate would-be protesters from voicing their opinion.
The gun culture and the exercise of free speech and assembly are all competing in the same space, said Timothy Zick. Zick is a law professor at the College of William & Mary who studies armed protests.

Mostly peaceful mass protests in several U.S. cities for racial equality following the May 25 death of George Floyd in the custody of Minneapolis, Minnesota police are sometimes being met by people with weapons.

On Aug. 25, the issue came to a head when Kyle Rittenhouse, 17, used a rifle to kill demonstrators Joseph Rosenbaum, 36.   Anthony Huber, 26, was also killed during a protest against police brutality in Kenosha, Wisconsin. His lawyers say he acted in self-defense.

In Portland, Oregon, Michael Reinoehl, 48, a self-described supporter of the far-left movement Antifa, was charged in the fatal Aug. 29 shooting of Aaron Danielson,. Danielson  was in a caravan of President Donald Trumps supporters who clashed with anti-racism demonstrators. Reinoehl, wanted on a charge of murder, was shot dead last week in Olympia, Washington as police tried to arrest him.

Zick and Gregory Magarian, a law professor at Washington University in St. Louis, are part of a group of scholars who are researching how the First and Second Amendments began to collide following a landmark 2008 Supreme Court ruling here. It struck down a Washington D.C. ban on private handguns, saying “the Second Amendment protects an individual right to possess a firearm unconnected with service in a militia,” essentially giving every person the right to carry a gun.

The Supreme Court may need decades to establish the parameters of that right, legal experts said. But in the meantime the clash of rights is starting to produce a real body count, Magarian said.

For a century the Supreme Court has refined what the First Amendment actually guarantees to Americans its decisions. In a landmark 1919 ruling www.loc.gov/item/usrep249047, the country’s highest court determined that speech that creates a “clear and present danger” to others is not protected, followed by a 1942 ruling www.loc.gov/item/usrep315568 that certain “fighting” words fall outside the protections of the First Amendment as well as others on what law enforcement owes public speakers.

The 2008 gun ruling does not address a lot of real life situations, scholars say, including the specific question of whether carrying a gun in the open is a protected right.

Pro-gun rights scholars and activists have long argued that the presence of weapons at protests does not intimidate free speech, but assures protection for voices that could be violently repressed if they were not armed.

They say that armed volunteers protected non-violent Civil Rights era leaders and point out that Martin Luther King Jr. in 1956 applied for a concealed carry gun permit in Alabama, shortly after his house was bombed. His request was rejected.

Some may feel they cant count on the police, the police might retreat at any time and that they need to defend themselves, he said.
Zick and Magarian acknowledge it is difficult to measure exactly how free speech is being chilled by public gun carriers. Firearms at contentious public political rallies may inhibit people from coming out and speaking and participating and making their voices heard in the first place, Magarian said.

There is no First Amendment right to attend a gun-free protest, the legal experts said. Only under narrow, specific circumstances can guns be prohibited, such as on the grounds of some government buildings.
POLICE CAUGHT IN MIDDLE

Larry Satterwhite, the head of Homeland Security for the Houston Police Department whose job includes keeping local demonstrations safe, said that hes seeing far more armed people at protests now than at any time in his three-decade career.
Demonstrators openly carrying guns is an unwelcome headache for police, he said, making it more difficult to ensure any given protest is safe.

Houston city ordinances forbid protesters from carrying metal rods or pipes at demonstrations, Satterwhite said, yet you can bring a firearm. It seems a little counterintuitive to us as law enforcement officers.
He said some people had never carried a gun before and suddenly they are carrying a gun to a volatile First Amendment activity where people are upset and highly emotional.

Officers repeatedly have to tell gun carriers at protests how to safely carry their weapon so that they are not inadvertently pointing it at officers, opposing protesters or their own group, Satterwhite said.

Kevin Robinson, a former assistant police chief in Phoenix and a professor of criminal justice at Arizona State University, said he was bewildered by the new phenomenon of citizens showing up at demonstrations heavily armed.
Police are right in the middle, Robinson said.

In Kenosha, Rittenhouse told a reporter for the Conservative website Daily Caller just before he shot and killed two people that it was his job to be armed in the streets.

So people are getting injured, and our job is to protect this business, and a part of my job is to also help people, Rittenhouse said. He said he had a rifle to protect himself and a medical kit if he saw someone hurt.

Other skirmishes between the First and Second Amendment have arisen in the 12 years since the 2008 Supreme Court ruling, such as fights over guns on college campuses. Some school officials argued here that the presence of weapons in classrooms inhibits academic freedom and truly free debate.
Until recently, open carrying was mostly done by hunters, far from population centers, said Allison Anderman, senior counsel at the Giffords Law Center to Prevent Gun Violence .

People were not going around with handguns on their hips to make a point, she said.

NASA’s Big Moon News: There’s Water All Over the Place